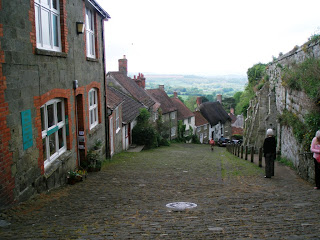 Rain.....at last! I know its unpopular but after 10 days of continuous wonderful weather all the butts were running dry and I was getting a bit fed up with continually watering my seeds! I have a weed problem in one of the raised beds with creeping mint! Worse than bindweed it is and I have resorted to painting each bit that pops up with a paintbrush dipped in glyphosphate as pulling it disturbs my tiny carrot and parsnip plants and beheading it with the hoe makes it pop up 5 new ones for everyone I chop off!! I have horse tail(equisetum) in that bed too......now that is a different fight completely as it is a plant descended from the time of the dinosaurs and as you can imagine is nigh on impossible to get rid of! Both these 'weeds' have their place.....but not in my heavily mulched no dig raised bed, and certainly not in the middle of my seedlings thank you!
I have started to shear the Ouessants last evening while waiting for my regular shearer Jock to phone to tell me when he will come and see to the large sheep. Last year when presented with the Ouessants he laughed and commented on needing a magnifying glass but did a reasonable job considering they wriggle like eels! Well I have a nice set of shears I use for the odd dagging job(tidying up bottoms that are grubby) or sorting out and flystrike that occurs when it is vital that the area is sheared clean of maggots very quickly....uggh!
But I have never in all this time sheared a whole sheep......I have clipped plenty of horses in the past and just regard sheep as a rather larger woolly version when it comes to clippers.
Well I did a reasonable job on the chosen 2 that were first in the queue as they were starting to lose their wool......primitive sheep such as Ouessants 'rue' their wool which means that when it starts to get a bit warm the oils and lanolin in the wool 'rise' and the sheep gets a bit itchy and rubs and the wool breaks and falls out!..........not ideal if you want to use the wool!
The Ouessant has more wool on it per pound/kilo of sheep than any other in the world and so from under a large fleece a very small sheep emerged! The first who is a bit of a tearaway got a couple of small 'nicks' from the shears which were sprayed with some purple antiseptic and the second one got away with no nicks at all to her.....but nicked my finger top with the shears and she had blood everywhere on her.....MINE!

I am doing some work for Dorset Community Actions 'Three Rivers Partnership' at the moment called Friends and Neighbours and at the moment am meeting all the agencies involved (known as the stakeholders) before surveying the general public in the chosen case study areas. Whilst on my travels I went to Shaftesbury for a meeting and after getting a sandwhich ate it at the top of Gold Hill in the picture. I am very familiar with this area having spent most of my adult life in North Dorset and it was interesting and sad to discover how things change......you only notice when you go back to an area and I had not really been back very often for about 10 years except to visit friends....so I went to see what had happened to my good friends old farm........

They had a County Council farm on the Dorset County Council farms estate near Shaftesbury where they worked harder and harder over 25 years for an ever diminishing return! My friend (I will call her S) and her husband (R) had a dairy herd of 60, raised rare breed pigs, rented a little attached cottage as a holiday cottage, did B&B, AND S worked nights in an old folks home and R did fencing contracting. Yet everyone who met them but did not know how hard they worked commented on how lovely and relaxed it must be to live in such a beautiful place! When 3 years ago they could no longer make ends meet they were forced to give up the tenancy of the farm........the County Council decided that the farm was too small (60 acres) to be a viable unit for anyone else (?) so decided to sell the house with 12 acres as one lot, the lovely old barns as another with a few acres and give the rest to an adjoining Council farm (the only one left in that area now) Well S & R were given first refusal to buy........but having few assets except that from the sale of their cows could not dream of buying the home that they had lived in for 25 years......!! They received notice to quit with the offer of a council house on a local estate.....well they had been good council tenants for the past 25 years hadn't they? Their lovely house was sold........to the only ones who could afford it....downsizers from London. So S & R left the farm.....they have never been back although they rent a small cottage 5 miles away........its too raw for them to return even to see their old friends and neighbours.....they meet them elsewhere!
I drove slowly past remembering all the good times we had had there and drove on seeing that some of the other council farms had changed into art galleries, alpaca filled smallholdings etc, the farming community long gone. The fields I noticed were rather unkempt along with the general feel of the area and hardly a cow in sight.....sad as this is the Blackmore Vale described by Thomas Hardy as 'The vale of little dairies'........subtle changes are going on and this description will soon no longer apply as we import our milk from elsewhere whilst those who can afford to buy up the little family farms who had the little dairies.....I will say no more as it causes lumps in my throat and tears in my eyes.
Posted by Val Grainger at 9:51 am

Why is it that everyone eats but few of us appreciate what it entails? Farming land is getting more and more expensive---and harder and harder to find. At least we have enough to feed ourselves and maybe a few others but....
Beautiful picture by the way---your country is so attractive. I have stacks of photos that look very similar to yours above from our trip years ago. Funny how I wouldn't dream of taking pics of houses here---but find it absolutely fascinating to drool over those of your country :-D
Anyway--no fleeces right now--but I will late this summer if you want one or some. There is also a lady in Wales that I think has some right now though:
http://www.icelandicsheepinwales.co.uk/
Have a great day Val--enjoy the rain
Monica

The farmers will only be truly appreciated once they've all gone and everything we currently eat is imported. Then watch the prices rise.

that is so sad. I have been saving up for a farm since I was 17 (for over ten years now, I'm not a high flyer!). Only now that it's 'fashionable' has everything come together for me. Unfortunately the second homers and downsizers from london or wherever have meant we will never be able to own our own farm. So we decided that we would just get the land and put up with the fact we'll never have a 'home'. The land we've bought though is not the land we dreamed of, beautiful as it is. The land we dreamed of is too expensive now.

We're lumped in with the current downsizing band wagon and it drives me mad. What'll happen when 'they' all get bored or they go broke?

I just read someone on a forum saying that they have downsized from london to devon and the cottage had had a 'crotchety old woman and her family rattling around in it for generations' so they were going to have to gut the house and start again. Turns your stomach.

I agree! I see so many people doing this it makes me very sad....real local people cannot afford to live in their own communities anymore!

Val Grainger
United Kingdom
Val and her husband and sons aged 18 and 8 live on the Blackdown Hills in Somerset with 2 dogs a variety of hens and lots of sheep!We grow all our own meat, eggs and 60% of our veg and fruit. We make wine, beer and cider too!

regular readers of this blog!